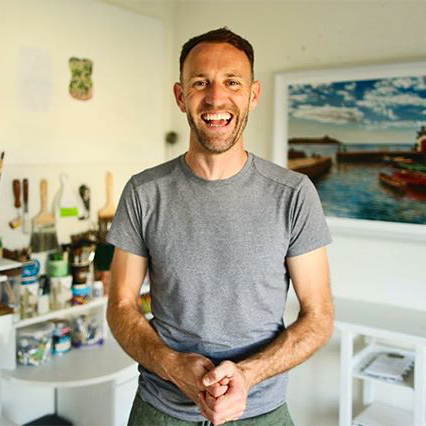 My paintings attempt to show humanity in harmony with nature and also try to capture a balance that exists when the natural world is left to itself. My work reflects my views about how I would like the world to be. I observe the beauty around me and try to capture that in my paintings, so that others may experience what I see and feel.

Ronan Goti has experienced a significant measure of success during his career. First achieving recognition as an accomplished seascape painter, most notable for his depictions of children playing on Dublin’s shorelines. Landscape and nature scenes have become increasingly prominent in the artist’s oeuvre.

Soft, seamless brushwork, careful draftsmanship, and pastel hues created by subdued filtered light are the essential traits of Ronan’s understated, reflective scenes of nature. Landscapes exhibit a sensibility to solidity of the ocean, expansive skies and effects of precipitated light. Nature is never harsh or austere. When waves swell toward the viewer, Ronan avoids the representation of climactic breakers, as even his most dramatic seascapes are characterized by tranquil composure. Yet it would be a mistake to ascribe this as an attempt to create passive images. Although he is determined to adopt this taming process, his canvases retain an urgency, their sense of being an excited dispatch from remote places. In many of his paintings, he is striving to express the same idea; a balance between serenity and turmoil, permanence and flux. The dualities of these emotions inherent in Ronan’s work stimulate a feeling of calm and meditation.

The inimitability of Ronan’s technique is unexpectedly complex in ways not instantly apparent. Executing an average of ten works per annum is testament of his incredible attention to detail and fastidiousness as each piece demonstrates his acute awareness and acknowledgement of the importance of drawing and control of tone. His paintings are defined by a certain opalescent effect created by building up thin layers of pigment,. A closer view reduces figurative representation into intricate arrangements of colour.

So convincing are these images that it is tempting to conclude that we are being offered direct access to the scene. This is illusory, of course; there is a deeper reason, which only becomes evident in conversation with him. Repeatedly, he speaks of the awe that nature inspires in him; whenever he is praised for achieving certain effects, he shifts the conversation back to the physical place he was privileged to witness, the light, the behavior of seawater and so on. This is more than a statement of personal faith; it is a questioning of the notion that artists can create new realities. In judging his achievements so humbly, Ronan underestimates his own interpretative gifts. His best paintings are much more than echoes of a superior natural reality; they are highly personal, and powerful in a different way form the phenomena that inspired them. It is this tension between the reluctance to falsify and the artistic instinct to create freely, that makes Ronan’s art so interesting.

In this continually evolving series of work, much excitement remains to see where Ronan will take us next.

Ronan Goti has been invited to give talks and demonstrations to many art groups and schools.